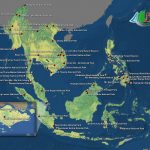 ASEAN region occupies three (3) per cent of the worlds total land area and is home to 18 per cent of known plants and animals. The Region covers four (4) biodiversity hotspots and has high species endemicity, which brings the region to the fore of the world s critical habitats that are important to global environmental sustainability. In a boost to enrich natural heritage and outstanding values of more than 1,300 protected areas in the region, the ASEAN Heritage Parks (AHP) Programme was established through the ASEAN Declaration on Heritage Parks and Reserves in 1984. AHPs are selected protected areas in the region known for their unique ecosystems and importance as conservation areas. Through the ASEAN Declaration on Heritage Parks, the ASEAN Member States (AMS) agreed to generate awareness of and effectively manage AHPs. As a result, the network has since grown to a total of 49 AHPs in various levels of development in the region.

Map of ASEAN Heritage Parks (AHPs) as of October 2019.
ASEAN Centre for Biodiversity

Covering 222,400 hectares and home to 17 different ethnic groups, Nam Ha National Protected Area (Nam Ha NPA) is a remarkable repository of biodiversity and ethnic diversity. In spite of its significance, however, human capital in charge of the management is really limited comparing to the size of Nam Ha NPA. Even though most of Nam Ha NPA staff hold forestry and environmental degrees, facing issues in the real situation is really challenging, Sithisack Paninhuan, Deputy Head of Nam Ha NPA, shared. With limited opportunities to join capacity building programmes, our staff are lacking of capacity and not able to properly implement programmes, especially the outreach activities , Sithisack said. While other donors only provided funds to implement projects, the ACB offered many training courses to address specific issues or to develop an action plan, including for CEPA, Sithisack added.

Nam Ha NPA also received technical and financial assistance from the ACB in updating and revising the draft Management and Conservation Plan in 2015 that was initially developed by the Wildlife Conservation Society (WCS) in 2003. The WCS developed the draft according to the needs at that time, which made it necessary to update the draft to be compatible to the current situation or current threats. 2 (Assistance from the) ACB is very notable to Nam Ha NPA because even though the management plan is not yet finished, their guidance allowed us to improve the draft, said Sithisack who has been working for Nam Ha NPA since 2013.

Important for its high biodiversity, tropical karsts, and gigantic limestone caves, the jewel in the crown is the most studied tropical karsts area in the world. The provision of facilities and management in the areas is increasing but this is not without controversy. Tensions have arisen in particular over the issue of participatory management and benefits for the local communities. Gaining community buy-in was a challenge for the management as banners were occasionally raised by Berawan and Penan ethnic groups to protest against the development around Gunung Mulu National Park.

To ease tensions, a number of CEPA programmes were initiated targeting local communities in the area, such as mini exhibit panels portraying the livelihood of the Penans erected at the Batu Bungan s craft market and appointment of some local community s leaders as members of the Special Park Committee. As a result, there are more locals willing to be directly employed by the management as park guides and temporary workers. From a total of 101 licensed park guides, 84 guides are from local communities including Berawan and Penan. Thus, this helps to also contribute to the State's Rural Transformation Programme as to alleviate their income levels. Dr. Victor Luna Amin, Manager of Totally Protected Management Services, Sarawak Forestry Corp. shared that park guides from Penan and Berawan ethnic groups were awarded as Outstanding Park Guides in 2013 and 2015, respectively . He also added that local communities established Boat Operators Association headed by a Senior Park Guide and more than five (5) families have established their homestays around the park.

Victor participated in the training conducted by the ACB on Biodiversity Assessment Methodologies, Data Gathering and Communication and Public Awareness for Park Management Staff in 2015. For Victor, this capacity building activity is the most interesting as it involved fieldwork in assessing the species of plants within a specified quadrant using a sampling method. He found the training useful in assessing the health of biodiversity of a particular area or forest type .

Implementation of the project contributed to the Aichi Biodiversity Targets and the Strategic Plan for Biodiversity 2011 2020 of the Convention on Biological Diversity and one of its significant outputs included the production of four animation videos including video on Gunung Mulu National Park to promote awareness and understanding of biodiversity.

The protected area managers, including local communities around the AHPs, were among the many stakeholders who benefited from the project ASEAN Heritage Parks Development through Capacity Enhancement and Information Development supported by the Government of Japan through the Japan-ASEAN Integration Fund (JAIF). It is succeeded by the project Improving Management Effectiveness in the ASEAN Heritage Parks through Capacity Development and Biodiversity Information Management, which was implemented in 2019.